Ceylon Cinnamon is very different to ordinary Cassia type Cinnamon you get in the store. Although mild and a bit under whelming at first brush, Ceylon Ceylon Cinnamon is impressive the more you get to know it. Some people just do not like Cinnamon, but this is because they are using Cassia Cinnamon which is harsh and overpowering. When you try True Cinnamon or Ceylon Cinnamon (Cinnamomum Zeylanicum) you will find it subtle, sophisticated with a heady aroma like no other. It is then you realize what a wonderful spice it is. 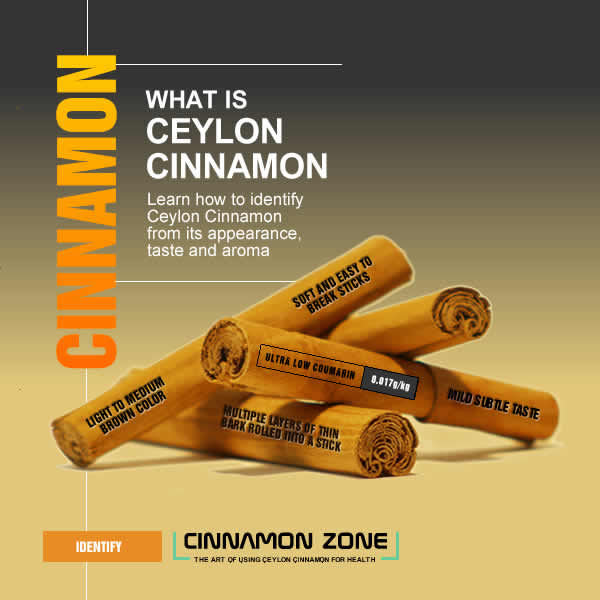 Made up of multiple thin slivers of Cinnamon Bark rolled into a cigar shaped Cinnamon stick. Cassia Cinnamon Cinnamon by contrast is a single thick bark that naturally curls into a cigar like stick when cut and processed.

At first blush Ceylon Cinnamon tastes mild. Some would say it has subtle sophistication. This property makes it perfectly suited for using in cooking. It never takes center stage like Cassia Cinnamon. Instead it blends like salt and pepper to create complex multi layered flavors.

Here again the aroma of Ceylon Cinnamon is very subtle. But this aroma is very refined and some would say " heady ". Boil it into a Cinnamon stick tea and smell it. You will see what we mean. Fragrant, exotic and soothing is the best way to describe it.

Not all Ceylon Cinnamon is created equally. It all depends on the harvest and most importantly the skill of the Cinnamon peeler. Some peelers will try to cheat by using the part of the cinnamon tree that has no cinnamon on the inside. Because of this the Sri Lanka government introduced quality standards called SLS-81. Read more about the grades of Ceylon Cinnamon here.

THE ART OF COOKING WITH CEYLON CINNAMON

Cassia Cinnamon in comparison is a hard bark which is not easy to break into small little pieces. And because Cassia Cinnamon has a strong taste and aroma it often over powers a recipe. Ceylon Cinnamon by comparison works behind the the scenes to create many complex flavors. In adds warmth and depth of flavor to virtually anything.

In the USA and Canada people are used to using Cinnamon powder while Mexico and many parts of Asia prefer to use whole sticks. Generally speaking Cinnamon sticks tend to be more potent. Grinding into powder loses some of the essential oils inherent in the cinnamon sticks. Still powder if produced right with cool grinding and packed in a well protected package without exposure to sunlight is a good alternative for our busy lives. The powder works better for certain recipes like a marinating steaks or pork chops, smoothies or even stew where you want some texture. For light soups a Cinnamon stick maybe better. Ultimately it is your choice.

THE MAGIC OF CEYLON CINNAMON OILS