While Ceylon Cinnamon sticks are all made the same way, they are graded according to color, density, blemishes, essential oil content and other factors. So it is important you understand these quality standards called the SLS-81 standards set by the Sri Lankan government. It will help you select the best quality Ceylon Cinnamon for your needs. 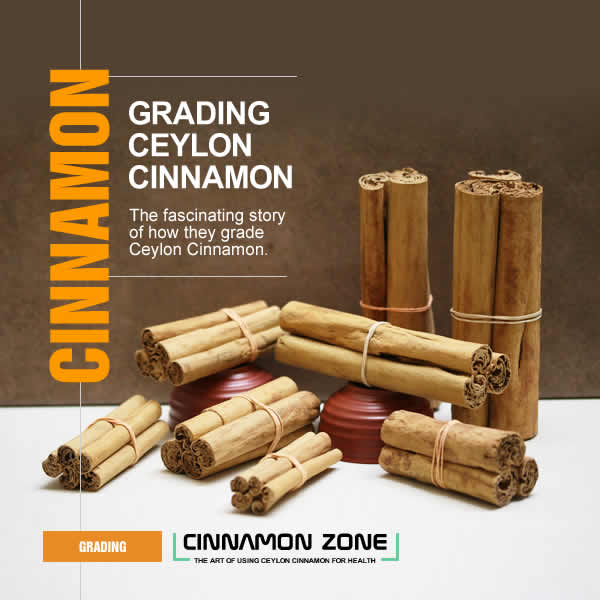 Ceylon Cinnamon sticks are also known as quills.  After harvesting and drying, cinnamon quills curl while the much harder cassia has a single scroll-like curl. Ceylon Cinnamon (True cinnamon) has a tan color compared to the dark red-brown of cassia Cinnamon.

The Cinnamon sticks should also have minimal foxing, which is a term used to describe reddish-brown warps caused by dampness. The more foxing there is, the lower the quality of the Cinnamon.

According to the spice Council of Sri Lanka SLS-81 standard Cinnamon can should have a maximum moisture content of 15%. Ideally it should be less than this, The essential Oils in Cinnamon sticks which determines the aroma, is specified at a minimum of 1%.

Chips, referred to as “quillings” and “featherings,” are sold as for grinding into cinnamon powder, sold on its own or as “pudding spice” in a compound with nutmeg, clove, cardamom, mace and allspice.

The chips are also sold for the distillation of oil. Higher quality Cinnamon Oils are extracted from the top grades of Cinnamon chips which has more oil content of higher quality (Cinnamaldehyde).

Cinnamon is also graded according to its diameter, tightness of the curl, color, flavour (based on oil content) and appearance (Foxing). Usually the larger diameter has a looser curl which less densely packed cinnamon. The smaller diameter Cinnamon sticks becomes progressively denser. with pieces of Cinnamon packed really tight and then curled into a stick.

Whole cinnamon has a significantly longer shelf life than ground cinnamon. The most typical raw cinnamon products are sticks; quillings (pieces of bark of remaining from the preparation of quills) featherings, the inner bark of discarded twigs and shoots; chips, trimmings from quills and inseparable inner and outer bark, cinnamon powder, cinnamon bark oil and cinnamon leaf oil.

Because of the huge variation in quality buyers should be carefull where they buy Ceylon Cinnamon sticks from. Even Amazon has all manner of bogus Ceylon Cinnamon retailers.

Even organic Ceylon Cinnamon can be prone to fraud. It maybe organic but if the product has high ash content or low volatile oil content it does not really matter if it is organic. It is useless and gives little of the benefits of Cinnamon.