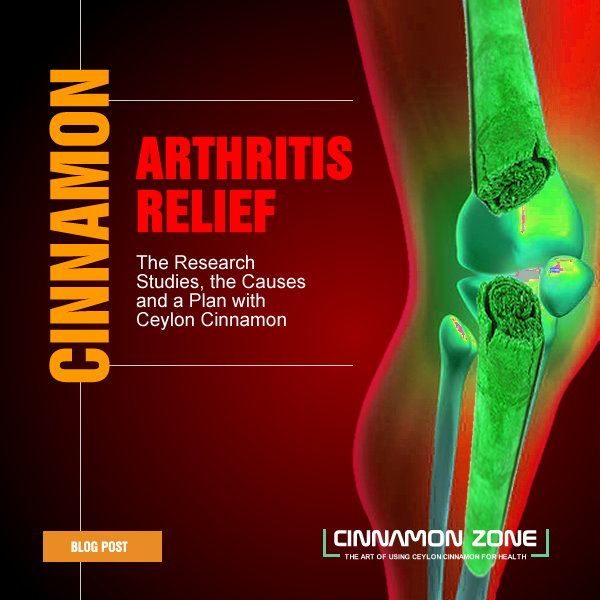 Cinnamon for arthritis has been used for Millennia. This is because Cinnamon is a powerful anti-inflammatory agent. Cinnamon is also the solution to many chronic inflammatory diseases such as Cardiovascular disease, Diabetes, Alzheimer’s, Dementia and Cancer. If you are taking cinnamon for arthritis, try to use low Coumarin Ceylon Cinnamon which won’t damage your liver and has negligible side effects.

Unlike anti-inflammatory drugs like Ibuprofen (Advil, Motrin), Aspirin or arthritis medications like Glucosamine, real Ceylon Cinnamon  (not tablets) has the benefit of having little or virtually no side effects (read side effects of Cinnamon here) if taken within the daily limit of 6g or less. Tablets or supplements have inherent dangers in the their production process  as well as other side effects like stomach ailments. Cinnamon on the other hand is a great stomach stabilizer among a huge range of additional benefits.

The major ones that affect most people are osteoarthritis, which is the “wear and tear” arthritis, and rheumatoid arthritis, an inflammatory type of arthritis caused by a defective immune system. Nearly 50 million Americans suffer from some form of arthritis. That is a shockingly high number.

If you were a physically active person, especially involved in extreme sports or overweight or an older person, chances are you have Osteoarthritis which is caused by overuse of joints. There in increasing evidence that our diet especially our infatuation with high dairy consumption is a major cause.

There are of course many other causes like accidents and injuries beyond our control. Age is one factor we have no control over. Like a car, the more we use our bodies, the more wear and tear we put on our bodies, especially joints.

Some people are genetically predisposed to arthritis but here again eating factors may aggravate the symptoms. Of course if you are overweight, you will put additional stress on your joints. And illnesses like gout or joint infections can also cause arthritis.

What we do know is that arthritis can be caused by a huge variety of factors. The best we can do is to find a natural remedy and model healthy habits to mitigate the pain of arthritis. And who knows, maybe even cure yourself. And we think Ceylon Cinnamon could be a huge part of that solution.

According to the Mayo clinic, the treatment options for osteoarthritis are Medication (including anti-inflammatory drugs), physical therapy and surgical options. Some of these options especially surgery or pain medications can have unintended consequences. While Ceylon Cinnamon may not be a treatment option for everyone, it could form an important part of a natural solution.

WHY CEYLON CINNAMON FOR ARTHRITIS

Cinnamon has high levels of Manganese (73% DV in 8g – 2 cinnamon sticks), which is the magic ingredient responsible for the formation of bones and connective tissues.

Our suggestion is not to pop Manganese or Cinnamon tablets to cure your arthritis but to take real Ceylon Cinnamon as an overall program of healthy living. This way you get the real thing without all the hazards and chemical compositions that come with commercially manufactured tablets.

Dosage : One thing to keep in mind is that you should not exceed your daily dose of Manganese or Cinnamon. Your daily Manganese dose should not exceed the daily limits. According to NYU Langone medical Center as well as the University of Maryland the daily value of Manganese for, Men age 19 or older is  2.3 mg of manganese and women age 19 or older should get 1.8 mg. Click here for the full daily allowance for all age groups. The FDA site recommends a daily amount of 2mg based on a 2000 calories intake. .

The NYU langone Medical center recommends NOT to exceed 11mg of Manganese per day, beyond which you will start to get nervous system effects.

Yet most commercial manganese tablets are sold in 50mg amounts. Go figure! If you take too much manganese it may cause nervous-system effects that mimic Parkinson’s disease, including tremors, difficulty walking and facial spasms. Taking Ceylon Cinnamon for arthritis is only one aspect of your total health plan. Ideally you want to include the following solutions into an overall plan of health living.

HOW WE WOULD TAKE CEYLON CINNAMON FOR ARTHRITIS

The best way to check if Ceylon Cinnamon for arthritis works for you is to try it.  To be fair you should give it three months. Our tendency is to overdose on something that is good for you. This is the wrong approach. Instead you should incorporate Ceylon Cinnamon in moderation as part of an overall program of proper diet and exercise.

The cost to have two cups of Cinnamon Tea twice a day for three months is under $60. If it does not work for you, Ceylon Cinnamon has other benefits like blood sugar control, settling your stomach, improving your guts health and so much more.

Make sure you do all those other things too, like eliminating sugar and dairy for the Cinnamon to have a chance. If you continue to lead an unhealthy lifestyle the Cinnamon will have difficulty overcoming the adverse effects of other factors such as high dairy consumption or bad gut health.

Learn how to slow boil Ceylon Cinnamon sticks which turns into a lovely red with a heady aroma tinged with hints of citrus.

We have given you a reasonable amount of research and a plan of attack. Now it’s up to you.