Does Cinnamon help with weight loss? Does it really work? If so to what extent? Will it burn away your fat? And which Cinnamon is best for weight loss? These are questions that go through most people's minds when they are considering Cinnamon as a weight loss aid.

These are very difficult questions to answer because there is insufficient scientific evidence that Cinnamon helps with weight loss. Our personal experience is that Cinnamon works for weight loss to some extent and for some people, but it must be combined with a healthy program of diet and exercise.

Will Cinnamon melt away your fat? Absolutely not. But it could prevent more fat from being added to your body. Think of Cinnamon as a weight gain preventer as opposed to a weight loss plan.

If you continue to lead an unhealthy life style and eat badly and then cinnamon will have a hard time making any progress whatsoever on your weight loss plan. Even if you consume huge amounts of Cinnamon. Besides consuming very high levels of Cinnamon could lead to high toxicity levels in your body. 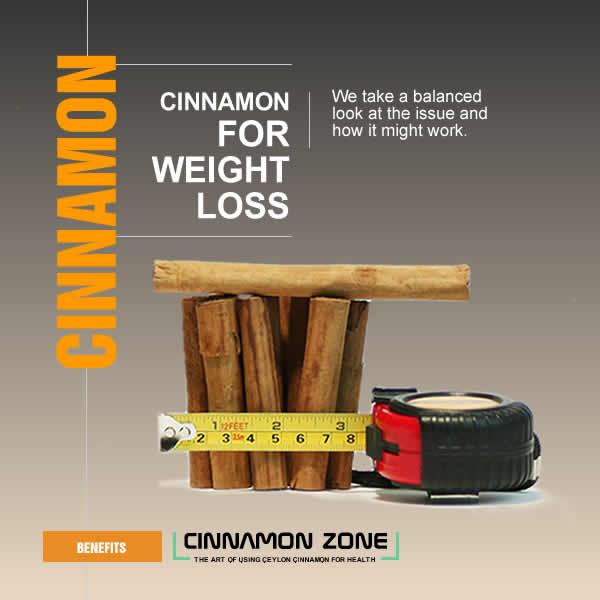 WHY CINNAMON FOR WEIGHT LOSS

WHICH CINNAMMON FOR WEIGHT LOSS

Ceylon Cinnamon is the best choice for a possible weight loss program because it has low Coumarin levels and won't damage your liver if taken daily. Cassia Cinnamon has high levels of Coumarin (0.4 % - 0.8% - considered high) which will damage your liver. So you might end up skinny and die from liver failure. Cassia Cinnamon is acceptable for occasional consumption but if you are taking Cinnamon on a daily basis for weight loss then Ceylon Cinnamon is the better choice.

The best way to loose weight is to reduce your food intake. And Cinnamon might help by reducing the hunger pangs. It does not seem to have any property to burn away your fat cells. But it could possibly prevent the accumulation of fatty cells. Ultimately it is your decision. Try it for three months. It it fails, the cost would be far cheaper than any other other possible remedy with virtually zero side effects. But it is essential to get good quality Ceylon Cinnamon.

HOW YOU COULD TAKE CINNAMON FOR WEIGHT LOSS

We prefer to drink a cup of our Cinnamon Bark Oil infused black tea, without sugar. It's easy and tastes absolutely fantastic without sugar. After all it is the World's best cinnamon black tea.

But if you are allergic to caffeine we would boil a cinnamon stick and make a tea out of it and have a cup every day with a meal. If you have no patience with boiling the sticks, boil a few sticks, make a jug of tea and keep the rest in the refrigerator. It will keep well for 3 days or so. It is delicious iced.

If the sticks are not convenient then we would suggest adding a cup of boiling water to a 3/4 tsp of Ceylon Cinnamon powder, brewing it for three minutes and then straining it through a fine filter. A bit messy but still quicker that boiling cinnamon sticks. We have used a French press and poured it carefully so the powder will not get into the cup too much. Our powder makes a pretty potent cup of cinnamon powder tea we have to say. And if you are traveling, the powder is easy to take with you.

The next choices are adding Cinnamon to your cooking (sticks), adding it into a smoothie (powder), sprinkling on fruit (powder) and the myriad other ways we list in recipes on our site. This you do when it gets boring to take cinnamon the easy way. Need to keep it interesting. Otherwise you will get sick of it.

HOW MUCH CINNAMON POWDER FOR WEIGHT LOSS?

The US National Health Service advises you should not take more than 6g (1.25 teaspoons of powder or approximately one 3 inch cinnamon stick) of Cinnamon per day for 6 weeks or less with a period of rest (about one week) after six weeks. Seems like good advice. Or you could take it for 5 days straight, have a rest for 2 days and then repeat the cycle. Maybe an easier approach.


1. Reduce Sugar Consumption - Taking out sugar from your diet is probably the single most effective way to lose weight. That includes all sugar you add to Tea or Coffee, sugar in soft drink, sugar in processed foods and sugar that comes from eating too much Carbohydrates. We estimate taking out sugar will account for near 55% of weight loss.

2. Eat balanced small meals - Small meals are better than large meals. The main thing however is to never repeat patterns. Have a bit of everything. Don't eat the same greens over and over again. If you must have some carbs mix it up with rice, bread, semolina. For meats, eat everything from beef to chicken to fish. A good diet we estimate contributes another 20% to weight loss.

However if you want to go extreme, we recommend you follow the Ketosis diet which seems very good for weight loss and keep it off. It is relatively easy to implement. With a dash of Cinnamon and this plan it should help get rid of your sugar and carb addictions. Read this article at Diet Doctor which provides great information.

3. Exercise - This is one of the biggest myths. Exercise will only help you tone your muscles and improving blood circulation which is great for skin, making it glow. It also helps get rid of toxins in your body, according to this article in the Huffington post..

But you should do some moderate exercise. Pick something you can do for the rest of your life no matter what. That is why playing a sport or dancing is far better than spending hours at the gym. Yes you do need a little bit of weight lifting to increase bone density. Exercise we believe contributed less than 5% of any weight loss program. but is still essential for good health. But overdo it and it will put unnecessary wear and tear on your body.

4. Good sleep for weight loss - There is increasing evidence that poor sleep leads to weight gain and obesity.

Weight loss cannot be found in a capsule. Besides releasing Cinnamon tablets (any tablets for that matter) directly into the stomach can be corrosive. Even Cinnamon powder should be diluted and ingested evenly. And in moderation as part of a healthy lifestyle of really good food and moderate exercise.


HONEY WILL NOT WORK FOR WEIGHT LOSS

We are not convinced that cinnamon and honey can lead to weight loss. Cinnamon on its own is at least plausible, but honey is not, in our opinion. Honey at the end of the day is sugar even though it may have other health benefits. Livestrong in this article admits as such in a roundabout way.

We cannot find a single credible study on how honey can help reduce weight. Honey is just piggy backing on cinnamon. The best way to check is to take them separately. Try it for a month separately and see.

This WebMD article says “Even if honey is natural, it is no better than ordinary white or brown sugar for dieters or people with diabetes, says dietitian Toby Smithson, RD, CDE, a spokesperson for the American Dietetic Association and founder of the web site, Diabetes Everyday. “. One obscure study on PubMed did find honey can reduce weight, but does not specify by how much and warns that it comes at the risk of other side effects.