Probably one of the best natural treatments for Acne is Cinnamon. This is because cinnamon is able to treat both the causes and symptoms of Acne. While topical treatment with cinnamon and honey will get rid of most Acne blemishes in the short term, it will keep coming back if you don't address the many causes of Acne. Fortunately taking Cinnamon internally can address the majority of the factors that cause Acne. 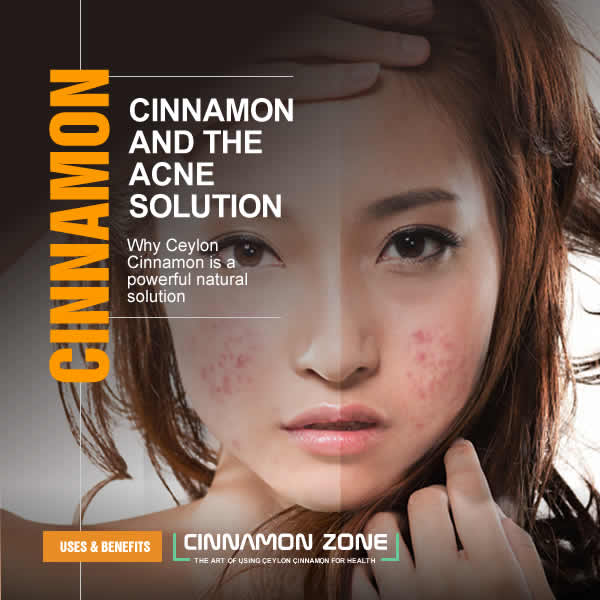 A primary cause of Acne is high levels of sugar and dairy as this study shows. Sticking to a low sugar and carbohydrate diet is probably one the best treatment options for Acne. The problem is this is very hard to do. There is fairly reliable evidence that Cinnamon has this amazing ability to modulate your blood sugar level. Cinnamon will help you in reducing your blood sugar levels from spiking excessively. What’s more Cinnamon also seems to help reduce the craving for high sugar diets. A double benefit so to speak. Drinking a cup Cinnamon Tea is probably your best bet. But make sure you eat or drink Ceylon Cinnamon which has ultra low coumarin levels and will not damage your liver, unlike the cheaper Cassia variety available at your local supermarket.

Candida overpopulation, parasites, bad bacteria or fungi, can produce excess levels of beta-glucuronidase. This enzyme apparently prevents the excretion of estrogens that needs to be removed, The result is too much estrogen and a buildup of toxic estrogens that can manifest itself as Acne. The beauty of Cinnamon is it’s ability dramatically control Candida and kill bad gut bacteria and Fungi. Cinnamon is the most powerful way to fight this, even against anti biotic resistant Candida.

The liver forms a central strategy in fighting Acne. The liver is designed to purge toxins from our body. If the liver is not operating properly, the body will try to purge toxins through our skin, which is what Acne is essentially. That means you should not take Cassia type cinnamon which has high levels of Coumarin, a substance known to cause liver damage. However Ceylon Cinnamon has ultra low levels of Coumarin (0..04%) and will NOT damage your liver.


Skin conditions like Acne can also be caused by poor nutrient absorption. If you have digestive issues, then your skin may not be receiving vital nutrients for skin like Vitamin C, Omega-3's, zinc, silica, Selenium, Copper needed for good skin. Cinnamon is a powerful digestive, that by delaying gastric emptying helps better nutrient absorption.

There are some studies although controversial still, which show that anti - oxidants may improve skin, making it glow and look better. This could be due to the fact that Cinnamon is hot, helping to draw blood to the surface of the skin to help fight bacteria on the skin surface. As one of seven leading anti oxidants in the World with a rating of 267536 μmol TE/100g (USDA 2007) Cinnamon may represent a very good treatment option for skin treatment, taken consistently and in moderation as part of overall program of a good diet and exercise.

There is reliable evidence that women on their period produce excess oil on their skin. The oil provides food for the bacterium P. acnes. This bacterium causes increased breakouts and inflammation around the time of women's periods. Cinnamon is a powerful anti bacterial that can get rid of this bacteria. Applying Cinnamon topically on your skin therefore is a great way to kill skin surface bacteria.

HOW TO TAKE CINNAMON FOR ACNE

While the best strategy is to completely cut sugar and carbs, Ceylon Cinnamon is a great addition to help you along the way. Speed up the process so to speak and forgive you for the times you take sugar and carbs in excess.

2. Topical Application of Cinnamon for Acne - The safest and easiest way to treat Acne topically is to use a Ceylon Cinnamon Face mask. Mix some Ceylon Cinnamon powder with honey. The honey will bring out the embedded dirt and bacteria to the skin surface and the cinnamon will help disinfect and bleach the skin to reduce surface imperfections and scars.